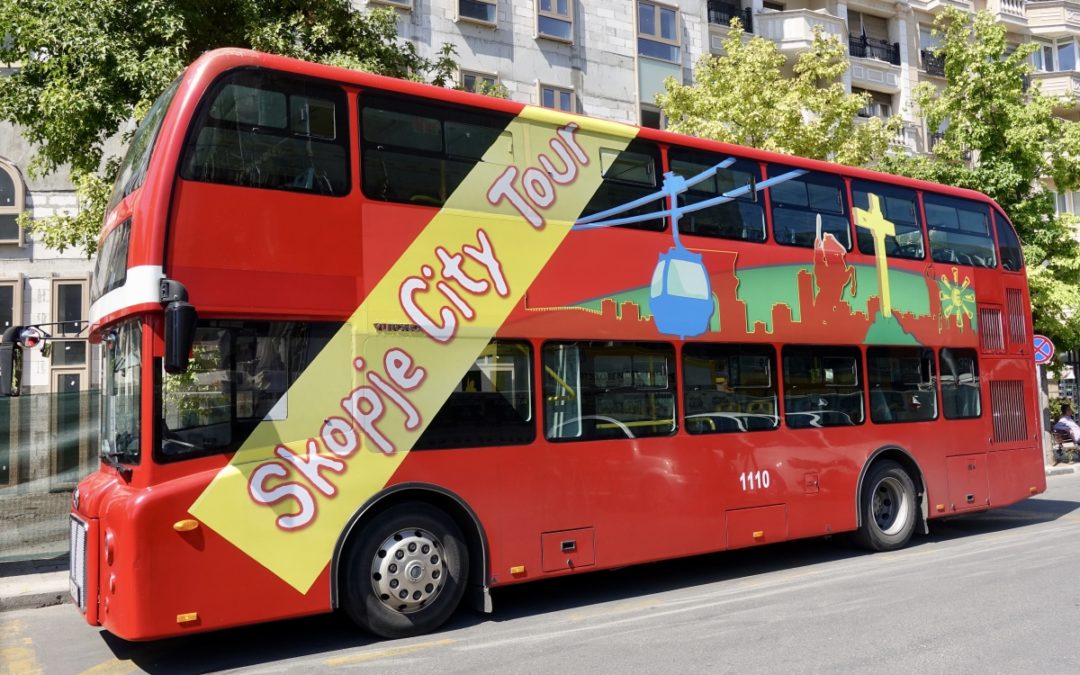 One of the things we really struggled with when we arrived in Skopje, North Macedonia, was working out how to catch a transportation. I’ve therefore put together this quick guide. This will in no way be definitive, as we left feeling not a whole lot more knowledgeable than our arrival, but I am hoping that it will give you at least a starting point with the Skopje public transport.

Skopje buses are mostly red double decker buses. They are only a few years old and this style of bus was deliberately chosen as a tribute to London, who lent Skopje some buses after the 1963 earthquake nearly wiped out the city.

Getting a Bus Pass

From our research before we arrived in Skopje we knew we had to buy a bus pass and put credit on it because it is not possible to pay on the bus, but we had no idea where to get it. The best information we had was “from the kiosks”. Now we just had to find the kiosks.

To get a bus pass at the main bus station. If you came by bus from Sofia to Skopje as we did, this is the place you got dropped off. You need to walk in the opposite direction to the main road, to where all of the local buses park. Walk past three or four rows of buses until you reach the rear of the area. On the right hand side you will see a yellow hut which looks like a temporary building. It has a door at each end. We went into the one on the left, and we able to buy a bus pass for 150MKD each. A normal ride is 30MKD, but if you go further afield it is a little more money.

This though, is not one of the kiosks mentioned above. They are to be found in a few places around the city where you can put extra credit onto the bus pass. We asked at our hotel for the nearest kiosk. Luckily it was right near the bus stop we used. We had walked past it a few times without noticing it, as we were expecting an automated machine. The kiosks are actually little manned offices only open during the day, so you will have to ensure you are prepared. Not all are as obvious as the one below. The one near our stop was set back into the buildings behind the bus stop.

(Update: my reader Paul provided this link in the comments below. It’s a Google Map showing the location of the kiosks, which are marked in blue)

We arrived into the main bus station by bus from Sofia. The bus station that the long distance buses stop at is also the main bus station for the local buses. This means at least you don’t have to go far if you arrive into Skopje by long distance bus to get your local bus. The only problem is that some buses drive into the bus station, some others travel straight past and stop on the road. I don’t have any suggestions for finding which your bus does, except going out to the road and watching the sign to see if your bus number comes up. There is actually a sign near one of the doors saying the bus numbers on the road, but there are a few doors and it’s not very obvious. We only noticed it on our third visit.

Most of the main bus stops in or near the city centre will have an electronic board that will show which buses are due to arrive at that stop next. If you know which bus number you need to get, this will help you to find where it stops.

We discovered that on Google Maps, if you zoom right in until you can see the bus stops on the map, clicking on them will give a list of the bus numbers that stop there.

Once you have a card, and know where your bus leaves from, the rest is easy. We found the buses to be reasonably regular and got us where we needed to be.

Reader tip from Madlen – Use the Moovit app to help locate bus stops.

How to get to Matka Canyon from Skopje

One of the most popular trips outside of Skopje is a visit to Matka Canyon. There are plenty of tours available that will take you there, or combine the trip with the Millennium Cross (see below) but we discovered that catching the public bus to Matka Canyon does the job and only costs 150MKD (about $3.75AUD/$2.80USD) for the return trip.

From searching on the internet we found that bus number 60 goes from Skopje to Matka Canyon. It leaves from the Skopje bus station and makes it’s way down Bulevar Partizanski Odredi. It is possible to get on at other stops along the way if you are staying along the route (we did this!)

While in Skopje I was able to use the public transport Skopje website www.jsp.com.mk to help confirm these times. Note this website is not in English, and I found it difficult to navigate. I used Gooogle Translate, but I was never sure if the information I found on there was correct, hence looking for other sources.

We caught the 8:45am bus, so that time at least seems to be accurate. I would suggest this is a good time to go, as we arrived before the crowds. By the time we returned from the boat trip up the canyon, there were a lot more people around. If just hiking, the 7am bus would also be good, but I don’t think the boat/kayak providers would be working that early as they were just setting up when we arrived. The bus takes about 40 minutes to get to Matka Canyon from the central bus station.

The return times I cannot confirm. We arrived back to catch the bus at about 11:45am. The bus leaves from the same place that it drops you off. Instead of waiting, we decided to walk the 2-3km back to the previous town. There we got on bus number 12 and made our way back into Skopje on that. Note that bus stops are not well marked, and locals seem to jump on and off at will. We asked at a shop and someone pointed out where we could get on the bus.

Prefer a tour? Click here for a Matka Canyon tour including transfers and boat ride.

Update: In September 2018 the website below had the following message – Линија 60 е скратена до Мечкина дупка. Google Translate tells me this is “Line 60 is shortened to Mechkin’s hole”. Unfortunately I could not find that on the map, but my reader Siarhei below translates that to Dolna Matka, which I could find. Dolna Matka is about 1km further from Matka Canyon than where the bus originally stopped. Apart from the above, there is no further information as to whether this is a permanent or temporary change.

Further Update: In March 2019, the JSP website has added another update to the line 60 bus and it now appears to be again running all the way to Matka Canyon. The update is as follows – Линија 60 сообраќа до последна постојка во Матка. Google Translate tells me this says “Line 60 is heading to the last stop in Matka”. Please let me know if this is not accurate.

Getting to the Millennium Cross

The other popular trip that can be easily done using the Skopje public transport is the trip up to the Millennium Cross. The bus to the Millennium Cross leaves from the main bus station. It is bus number 25 and can be found on one of the middle rows of the station. It can be a bit tricky to find, but look for the sign in the photo below. The buses leave about every half an hour, and it takes around thirty minutes. The bus drops off in the car park of the cable car, which will take you up to the cross. It costs 30MKD ($0.75AUD/$0.56USD) if you use your transport card. I have also heard reports that tickets can be bought on the bus for this trip from the driver for 35MKD, but as we used our cards I can’t confirm this.

(Update: Thank you to my reader Bronwyn who has informed me that in September 2018 that she could not pay cash to the driver on the bus for the trip to Millennium Cross, so I suggest always purchasing a ticket in advance)

(Update: Thank you to Carla who commented below letting me know that as of 19th October 2019, weekend bus rides to the Millennium Cross are now free)

The bus stop to Millennium Cross

Return buses leave from the same place they drop you off and strangely don’t seem to run as often as the buses up to the hill. We did find a timetable of the buses posted on one of the pillars in the bus station near where the #25 stops. Be aware though, it is not in English and uses Cyrillic text, so some guesswork is involved, but we were able to work it out. Alternatively, ask the driver what time the bus returns.

*Please let me know if you find any of this information incorrect, so I can update as required.

For more information on things to do in Skopje, have a look at my main post here.

No longer keen to give the Skopje public transport a go? Have a look at these tours instead.

You might also like these posts
Monastery of St Naum – A Day Trip from Ohrid
Free Food Tour in Sofia, Bulgaria
Visiting Plitviče Lakes National Park

Found this useful? Share with your friends and pin for later

Monastery of St Naum - A Day Trip from Ohrid