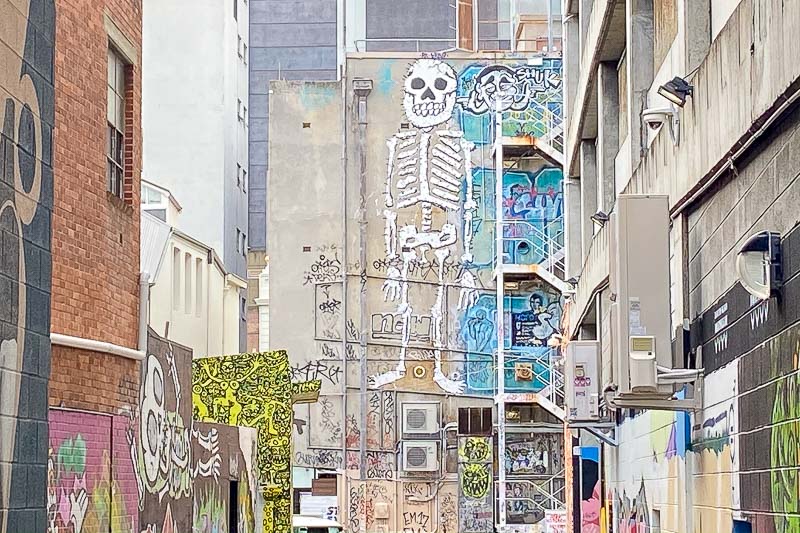 As we cruised from Australia to New Zealand we had a day to explore Hobart, Tasmania. We had only been here about twelve months before, visiting all of the main attractions we were interested in then. I had not anticipated visiting again so soon and was really in a quandry as to how to spend our day. When our ship docked the weather was terrible, cold and rainy even though it was the middle of summer. We decided to at least go for a walk. We came across some street art, which gave me an idea. A quick google later and I had a list of a handful of locations where some other street art could be found. As we walked we looked down laneways finding even more great pieces. Here is some of the amazing Hobart street art we found, with locations, and, if I could find it, the artists too.

This was the first mural we came across which gave me the idea to keep looking for more. It is located in an arcade on Liverpool Street, opposite Hudsons Coffee, not too far from Argyle Street.

After a quick internet search, I saw that there was some more street art listed at the CWA building on Elizabeth Street. This took up the whole side of the building down a small alleyway. As you can see below, the artist is Amalea Smolcic

As we were walking to the next location I had found online we passed these beautiful black cockatoos on the Farm Gate Market Shed on Bathurst Street. I just happened to time it nicely as the bins out the front were being cleaned 🙂

This lovely wall is tucked inside Mathers Lane. The colours make it a focal point in the little courtyard. I was able to discover this piece is called “Terraform” and it was painted by Hobart local Tom O’Hern. It was originally done in black and white but later O’Hern added the colour to it.

Just around the corner on Criterion Street is this huge man taking up half the side of a building housing The Floral Criteria. He’s called “The Lost Giant” and is using his mobile phone to help him find his way around the streets of Hobart. He does have legs too, but there were trucks parked in the laneway blocking them from my view. This artwork is by Stormie Mills who has a distinctive style. I came across more of his art later in the day as we wandered further.

On the opposite side of the same building is the below. This art work is by Order 55, who has many other pieces of street art around Australia.

As we were walking down Liverpool Street we came across an alleyway between the Slumber Shop and Legal Aid that was filled with street art. This lead through to Bidencopes Lane that is in my opinion the pick of the places to visit if you only have time to visit one place. It is Hobart’s answer to Hosier Lane in Melbourne and there are dozens of great murals, indispersed with small artworks and quirky sayings. Here are just a few of the ones that were easy for me to photograph, but it really is worth going yourself.

The name on this one was “Pitchy”

This one is by Sam Dobransky

This huge mural is by well known street artist Jamin

Tucked in a tight corner, I did not see an artist on this one.

Like the one above, this owl was half hidden behind parked cars and I did not see the artist.

Is the artist of this one Freekshow?

This one was one of my favourites, but again I didn’t get the artist.

This wall was another done by Tom O’Hern

Bidencopes Lane is primarily used as a car parking area behind shops in the local area.

While in Bidencopes Lane we picked up a coffee from the tiny hole-in-the-wall Staple Coffee. Simon happily declared it the best coffee he had had in months, so if you are needing a quick pick-me-up, this is the perfect place.

We left Bidencopes Lane and turned right on Murray Street, and only walked a few metres before we saw more street art between buildings just before we got to the Centrepoint entrance. These were all about animal conservation. All the murals have been done by TOPSK. He is a local Hobart artist and was initially engaged by the Antarctic and Southern Ocean Coalition, to paint the Southern Ocean Mural.

Around the corner on Collins Street these strange faces can be found down a little laneway on the side of Sfumato Hair. It’s called “Rodent Six” (because there are actually six of these heads, they just wouldn’t all fit in my photo) and was painted by Luffy Rae.

Just around another corner on Victoria Street is this diving girl – or at least that was what I thought when I saw it. It’s actually called “Yes Mountain” by Ghostpatrol and Bonsai and is inspired by exploration of the Tasmanian landscape.

Retracing our steps back along Collins Street we came to Collins Court, a nice little outdoor public space containing the three pieces of street art below.

The first two are by Stormie Mills and I did not realise they should have been photographed together because they are actually one mural. Both parts sit separately on different sections of wall, but once I researched and then looked more closely, I noticed the first character is actually pushing the swing that the second character is sitting on. This is called “Everybody Needs a Hand Sometimes”.

This is another piece by a well known street artist, this time Phibs. who has painted some of the local birdlife in “Birds of a Feather”

Continuing further down, but on the other side of Collins Street we come to the Purdy Mart area. There are three more good examples of Hobart street art here.

This first one is by Jae Criddle and shows people sitting on chairs. Called simply “Chairs”, it’s a tribute to the person Purdy Mart is named after, Arthur Purdy, who owned a secondhand furniture store in this area.

Taking up the side of another building is “Red HandFish” by Amok Island.

And the third piece decorates the wall leading to the carpark. It reminds me of another Tom O’Hern creation but I could not find anything to confirm that.

As we made our way back to our cruise ship we found one more piece of street art, simply called Weedy Sea Dragon. This one was also done by Bonsai and Ghostpatrol.

While walking the streets of Hobart, look out too for the electrical boxes that have all been decorated in different styles.

While these are some of the Hobart street art I saw as I walked around, there are some other well known pieces that I did not get to. There is a huge painting by the renowned artist Smug on Tasma Street in North Hobart, and an area around the Lynton Street underpass that has some good art too. Another area that I’ve read is worth exploring is further along Elizabeth Street in North Hobart where all the cafes and shops are located.

Look out for more street art in the future too, with the Vibrance Festival happening again in 2021 which will bring more fantastic artists to Hobart to add their mark.

Good luck with your own hunt for street art in Hobart.