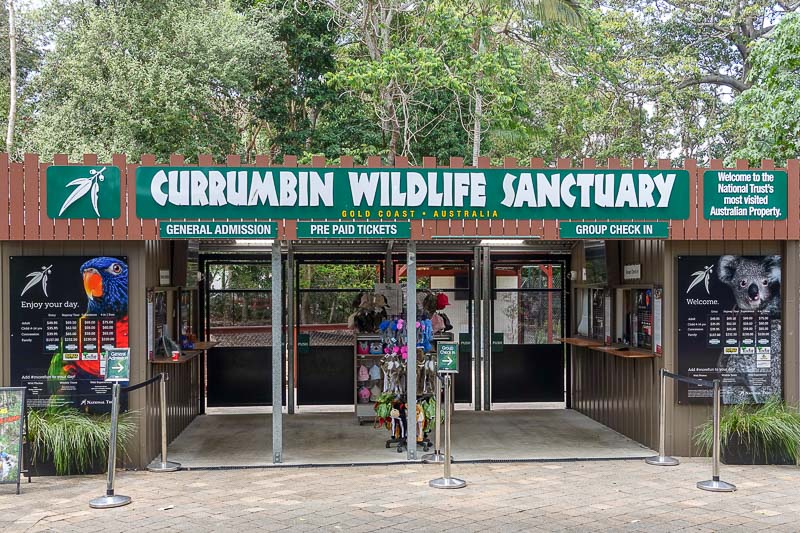 I have travelled to the Gold Coast in Queensland many times. Most of the trips have been for my kids to participate in competitions for their various sports, but we have always stayed on or had time for some tourist activities. In November during our visit, we went to Currumbin Wildlife Sanctuary for the first time. Here are my thoughts.

The Gold Coast is synonymous with a few things in Australia – sun, surf, theme parks! After spending some time on the beach, most people that come here immediately fill their days with the thrills of the theme parks. Sure, we have done that too in the past, but really themes parks are not our thing, so we were looking for something else to do for a day.

Currumbin Wildlife Sanctuary houses Australian native animals. Pretty much any you can think of will be here.  The sanctuary is huge, with lots of shady trees. This is perfect to keep the hot Queensland sun off while visiting.

Shady walkways to protect from the heat

The first thing we noticed about Currumbin was that it was BIG! No small cages here. There are also some big spaces between the displays. Luckily there is also a little tram to jump on to get from area to area if you prefer. We initially chose to walk rather than get on the tram. The gates had just opened when we arrived. The walk was  peaceful and felt like it was just us and the trees.

Birds in the aviary

After passing through an aviary, we came to a kids playground area. There were many things to climb on and play with. All had an educational twist to them, with games and challenges. There was a huge spiders web and a gecko wall for climbing on and dinosaur bones buried in the sandpit. As I sat down on the crocodile below a motion-sensored speaker started telling me about the huge reptiles! I was not expecting it and it made me jump so much I nearly fell off the crocodile!

Entrance to the playground – big kids allowed too!

Luckily that crocodile is not real

Currumbin has an extensive list of wildlife shows and displays that occur throughout the day. There are various animal displays, shearing displays, and cultural displays. We happened to wander past as the Free Flight Bird Show was on and we watched for about 15 minutes as birds flew over our heads. At least, they were mostly just over our heads. They were so close we could feel the wind as they went past, and occasionally got a wing in the head as well. I think we picked the cheap seats 🙂

During the free flight bird show

Even the pelicans got involved

After the bird show we got swept along with the crowd to the reptile show. Here we got up and cosy with some lizards and snakes. Or at least as close as I like to get. Yes, they let them loose, including a couple a big venomous snakes! I was too busy paying attention to them staying on their own side of the barrier though to remember exactly what sort of snakes they were.

A snake – no further info matters!

After each of the shows there were opportunities to have photos taken with the animals involved. There was another dedicated area we saw that also had various animals during the day for visitors to get up and close with and have photos too.

One of the most interesting parts of Currumbin for me was the animal hospital. I loved how they had glass walls so you could stay and watch actual procedures taking place. There was nothing happening as I was there. The vets had just woken up a koala. Next there was a turtle about to go in to get his shell mended. I was too busy watching, and didn’t even think about taking a photo!

Tasmanian devil hiding in the undergrowth

That crocodile is nearly as big as the fake one I’m sitting on!

We meandered through to bush visiting some more animals along the way, and soon came to a huge open area where kangaroos roamed freely. We bought a small cup of food and then hand fed a kangaroo or two. They weren’t all that interested though – I think many others before us had also fed them. The kangaroos happily played in the shade while we patted them.

While we were enjoying walking around, we couldn’t leave without a tram ride, so we hopped on the tram thinking we would do a whole loop and then again walk back from where we were. Unfortunately the tram didn’t do a full loop, so in the end we got off back near the entrance/exit.

The tram. Each one had a different engine.

We had been looking forward to this moment all day! Now was when we were going to hold a koala! Until now, I had never done this, but there was no lineup, and the others I was with REALLY wanted to do it. I thought the koalas would be quite solid and heavy, but really they weren’t. The one we held was soft, but those claws gripping on to me meant business. I would not like to be on their receiving end if the koala got angry.

I got to hold a koala! (That’s my two daughters and a friend with me!)

Overall this was a really enjoyable few hours. Being Australian, I have seen all of these animals many times over and interacted with some of them at nearly every zoo. It is quite common to be able to feed kangaroos almost everywhere! Still, it was fun. Our visit was entertaining throughout and I did not feel bored or tired of walking. The highlight was, of course, holding the koala.

Getting to Currumbin Wildlife Sanctuary

Currumbin Wildlife Sanctuary is located about 30 minutes drive south of Surfers Paradise on the Gold Coast.  Uber and taxis will be the quickest way to get there but it is also possible to get there for only a few dollars on public transport. It depends on exactly where you are leaving from, but the trip will take about an hour and drop you off right outside the front doors of the sanctuary. There are a few different options of bus and tram combinations, so I suggest using the directions function of Google Maps and selecting public transport to find the quickest and most convenient options for you.

Looking for more Australian animals? See them in the wild in South Australia at Innes National Park and the Flinders Ranges. You can also visit Monarto Zoo for a safari experience.