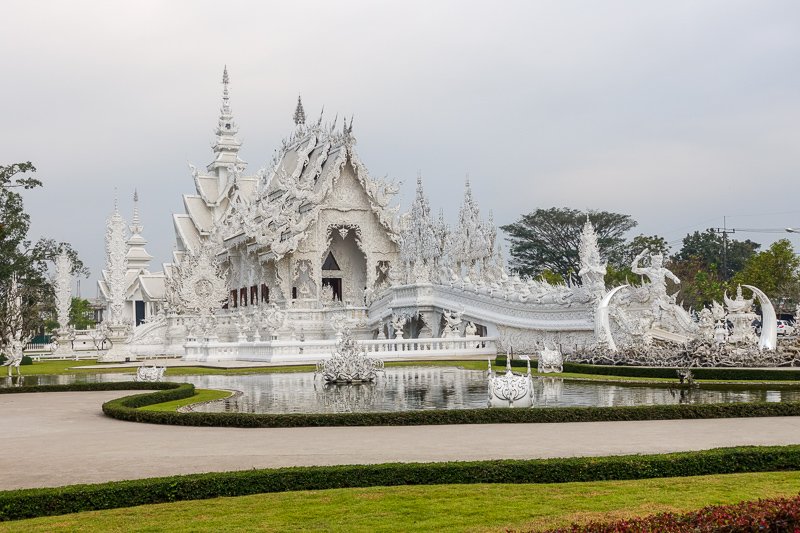 Wat Rong Khun, or the White Temple as it’s more commonly known, is easily the most popular attraction in Chiang Rai, Thailand. I, like many others before me, came to Chiang Rai just to experience this Buddhist temple (but this northern Thailand town has so much more to offer, see my post on Things to do in Chiang Rai here) and yes, it was really worth the trip.

The Chiang Rai White Temple is a relatively recent addition to the tourist landscape. It was first opened to the public in 1997. It is owned and funded totally by local artist Chalermchai Kositpipat. He decided he wanted to have total control over the design, so it’s built just how he wants it with his own money. He will take only small donations up to 10000THB if you feel inclined to help out.

Even before entering the temple complex, the artwork of Kositpipat greets you. Everything fits the theme, even such mundane things as traffic cones and no smoking signs.

Before entering you can share a bench with this fellow

Even the traffic cones here match the temple

The main building cannot be missed for it’s white intricate architecture and lovely tiered roof. Everywhere visitors look there is something new to see. The Chiang Rai White Temple interior is actually quite small, and no photography is allowed. You will be asked to remove your shoes as you approach over the dragon bridge. As we entered right when the gates opened, a long line formed immediately to go inside the temple. By the time we approached the small inside space it was completely crowded with genuine worshippers, so we had a brief look and moved on to allow them space. Totally unexpected though is the artwork on the walls, depicting modern fiction and non-fiction characters such as Spiderman, and Michael Jackson. In my (non-Buddhist) opinion this is one of the least interesting areas, but perhaps if we had stayed longer we would have appreciated it more.

Side view of the White Temple

The intricate design of the White Temple, with storm clouds looming overhead

One of the amazing statues as we entered the temple

This sculpture is in the ground near the temple bridge

The mirrored mosaic tiles show up well on this “tusk”

The view as we exited the temple

Some of the great statues around the temple

As you walk through the grounds there are stunning white statues, decorative fences and other structures that fit beautifully with the white temple.

The fence separating the temple from the rest of the complex

Decorative features on one of the gates

This was strangely set up for photos. Notice the faces of the animals missing where the subjects stand.

The bell is a little less traditional than usually found at temples.

A lovely golden structure near the main gate

There is a wishing well, where of course visitors can throw in a coin for good luck. There are also many little hanging silver decorations that can also be puchased, written on and hung in various places for more good luck.

The coins glittering on the bottom of a well. This one is based on your star sign. Stand in the right spot, and throw in a coin for luck.

Thousands and thousands of these silver ornaments hang in various places around the complex, including in “trees” and under the walkway canopy

There were a few of these tree structures, where each layer is created by hanging good luck tokens

One building really stands out, because against all of the white, it is instead gold. Still in the same intricate curly style, this golden building is, in fact, the toilets.

Some very fancy toilets. I couldn’t avoid the crowds here

What really got me though, were the masks hung throughout some of the trees. Some were non-specific, but what were the Marvel superheros, a Pirate, Deadpool and the Ninja Turtles doing here?

Terminator and Deadpool, hanging in a tree…

No, I do not understand why these were in the trees

And a ninja turrtle to complete the strange assortment of masks

The whole temple was almost pulled down after a huge earthquake hit the area in 2014. Chalermchai Kositpipat did not want to rebuild the Temple if it was structurally unsafe and had to be removed, but luckily the damage was mostly only superficial so relatively easy to repair.

Building works at the temple are ongoing, and are not expected to be completed until 2070. That means each visit over the years until then will see more and more newly added sections. During our visit we could see another large building being erected behind some of the existing buildings. The plan is to build a centre dedicated to Buddhist teachings. Kositpipat believes that by building this huge offering to Lord Buddha he will become immortal.

One of the areas we couldn’t go to and is still under construction. This building looks like it will be pretty impressive when it’s finished.

After you have looked all through the temple grounds, just outside the exit is an art gallery of Chalermchai Kositpipat’s artwork. It’s free to enter and worth a look. Some of his artwork is fantastic!

How to Get to the White Temple, Chiang Rai

The White Temple is about 15km from the centre of Chiang Rai. If you are staying in town, no doubt every tuk tuk driver you come across will offer to take you to the White Temple. We didn’t use this option, but my guess would be it would cost around 300-350THB (around $10USD/$12AUD) for a driver to take you there, wait, then bring you back to town,

The alternative, which we chose, was to take the local bus from the bus station in the centre of Chiang Rai. There is a sign with times it runs on it, so you can’t miss it. The bus we took left exactly on time. It cost 20THB   ($0.60USD/$0.85AUD) each way and drops you right at the intersection of the road the temple is on.  It’s only about 100m down the road and easy to see from where you get off. To return, we went back to the bus stop near the intersection, and waved down the next local bus that came along.

A third way to see the White Temple is on a Chiang Rai day trip from Chiang Mai. See below for a list of some of the tours, perhaps combined with other local attractions in the city.

Entry to the White Temple is free for Thai nationals, while foreign visitors pay a small sum of 50THB ($1.60USD/$2.10AUD)

The temple is open everyday from 8am to 5:30pm

(Information correct as at January 2018)

Looking for more things to do in Chiang Rai? Read my post here.

Are you visiting Vientiane, Laos while in the area? Here’s what to do during your visit there.

Want a Thailand travel guide? Pick up one of these for your trip

Things to do in Chiang Rai