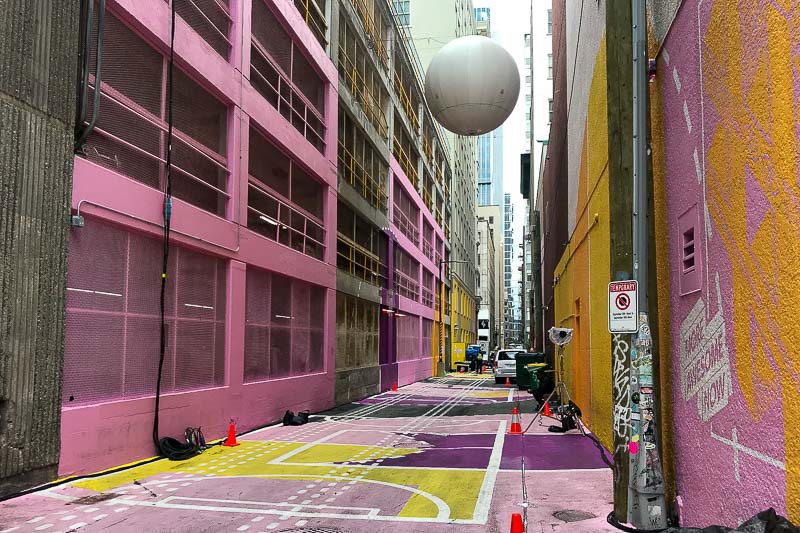 Our trip to North America was coming to and end. We had just finished up an amazing road trip from Vancouver to Calgary, and now we were getting on a plane to fly back to Vancouver. We had a bit over 24 hours until we would board our flight to head home to Australia.

We were staying at yet another of Vancouver’s hostels, this time the Cambie Hostel Seymour. There are two Cambie Hostels in Vancouver only a street or two apart. The one we chose was in a bustling area above a pub with lots of other nightlife venues around. I had read that it could be noisy, especially on the weekends – and we were there on a Friday night! We had a private room, with a shared bathroom. The room was very basic. Just a bed and two metal stools. It was clean though, not too tiny and the bed was comfy. The bathrooms weren’t too bad, but strangely we encountered something here I only associate with less developed countries – we were requested not to flush the toilet paper!

This was pretty much everything in the room we had. Where I am standing are two metal stools.

The best thing about the hostel though, was that it had it’s very own hostel cat called Ding Dong. She wandered over two floors of the hostel, having her own area for eating and sleeping. It was cute to see little cat doors allowing her to get around the various sections. Ding Dong was very friendly, and spent the afternoon cuddled up on Simon’s lap in the common area as he got some good reading time in while I caught up on some of the boring parts of the trip, like backing up photos and making sure all was okay for our flights home (I had hoped for an upgrade but it didn’t happen!). This was the first time all trip we had really had some down time, and it was a good opportunity to chat with some of the other travellers and generally relax.

We were meeting my daughter Bailey and her partner Luke for dinner and had chosen The Flying Pig. There are a few of these restaurants around, and we went to the one in Yaletown. Just as we left to walk there (about twenty minutes) the heavens opened and it started to rain. We often loose track of what day it is, and as we were around the corner from the restaurant I mused that it was Friday, so perhaps we should have made a booking!

As it worked out, yes, we should have made a booking! There were no tables available, but we gave a phone number and were told a table would be ready in about twenty minutes and they would call us. To while away the time we went to the nearby Yaletown Brewing Company. The boys ordered a beer – and immediately our phone rang to tell us our table was ready. Good to have a wait of only five minutes, not so good for the boys who now needed to drink their beers quickly.

The Flying Pig, unsurprisingly, is a carnivore’s paradise. For me, not so much, since I border on being vegetarian and almost never eat red meat. I was able to get an appetiser of salt and pepper squid as my main meal though, and that was plenty for me. Everyone else declared their meals delicious.

The pork rack was apparently delicious

My small serve of salt and pepper squid was tasty and big enough for me.

Early the following morning we backed up our things and made our way to Bailey and Luke’s place to reorganise all of our luggage. We had brought things over for them, so now had half empty bags to bring home. This was not an issue I ever thought I would have!

We had time for one more attraction before we went to the airport later in the afternoon and we chose to make our way to the Vancouver Aquarium. Bailey had been before, but had liked it so much she had requested to visit again when she was able to join us. The aquarium is modern and interesting, and has more than just fish. Inside there is an area with butterflies, sloths, monkeys and other tropical animals. There’s a bat cave too, but the bats were still asleep during our visit. Best of all though are the larger animals outside.

In the butterfly house

A pretty green snake – staring right at me

Feeding on fruit in the butterfly house

Of course there are also dozens of tanks filled with all sorts of fish, from wacky and wonderful to bright and colourful. There were the usual favourites and plenty of local species too.

Every aquarium has a display including clown fish

No idea what type of fish this little guy is but boy he is cute! He’s about an inch long!

So many petty corals

I always like the jellyfish in Aquariums if the display is done well. Here they are all done well

We were particularly keen to see the two walruses. They are still babies, but already huge. These guys are not really on display, they can only be seen during the short keeper talks a few times each day. There aren’t too many walruses in captivity, and they are involved in a lot of research to learn how climate change is affecting them. The area they come into with the keepers is small and it’s kind of hard to see through the glass, but still it’s fascinating to learn about the walruses and see their behaviour even if only for a few minutes.

The Walrus area is mostly hidden from the public, but they are brought up to these windows a few times a day for visitors to see.

Right next to the walruses is the poll the sea lions play in. Again the sea lions are research participants, helping us to learn about preservation of the species in this local area. The aquarium also has seals and penguins, and surprisingly, a dolphin. It’s illegal to keep dolphins and orcas in captivity in Canada. The dolphin here, Helen, was rescued after being caught in fishing nets, and unfortunately it meant her flippers had to be amputated. Now she has small stumps and she can still swim around, but she would not survive if released into the wild. She takes part in research about the way dolphins use their sonar to find things.

We had enjoyed all these other animals, but then we were mesmerised – by the sea otters! We spent way too long watching these cheeky little animals twist and turn and play in the water. There are seven sea otters and Vancouver Aquarium, but only four of them were on display during our visit. We were particularly keen to see one of the others,  and that was Tazlena, a tiny little girl who was only a few months old. She was less than a day old when she was found abandoned in April, and had only just gone on display a couple of weeks before. We timed our visit though with when her pool was being cleaned and she was off display, but we could hear her tiny squeaks.

You can watch the Vancouver sea otters via otter-cam here

These guys are the cutest!

As we were watching the sea otters we had a close encounter with another new type of wildlife, raccoons! Three of them came down from the roof of the aquarium and played hide and seek around some vending machines before wandering off to find lunch in the nearest trash cans! I know these guys are considered pests, but they have such expressive little faces and were fascinating to watch.

Two of the sneaky raccoons appearing from behind the vending machines

All too soon it was time to head back to pick up our luggage and make our way to the airport. The weather gods were still not being nice, and decided a deluge was in order as we walked through Stanley Park back to our bus stop. I suppose though, for an erea renowned for it’s rain, we had been really lucky for the majority of our trip. It had mostly rained when we were driving or inside so until now had not really bothered us at all.

Goodbye Canada, we had an amazing time and will absolutely be back to visit you again.

Please share with your friend and pin for later